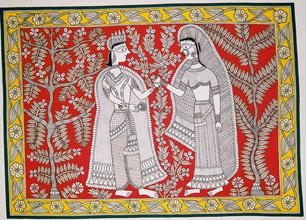 Rama and Sita
MATERIALS
Student copies of The Ramayana.
(There are countless versions from illustrated “comic book” style to elaborate texts).

ACTIVITY
Focus:
Ask students to brainstorm “What are the qualities of a hero?”
Include fairy tales, myths, movies, comic books and real life heroes.

DEVELOP UNDERSTANDING OF HERO CYCLE:
Introduce the concept of the “universal hero” depicted in stories and myth since ancient times. Display the “Hero Monomyth Cycle.”  Invite students who know the know the plot of the original Star Wars movie to analyze Luke Skywalker as the “hero.” (Joseph Campbell was a consultant to George Lucas when the script was originally written. It closely follows the formula.) If students have read the Epic of Gilgamesh, this work can be similarly analyzed. The Greek heroes from The Odyssey or Jason of Argonauts’ fame can be considered. Define the meaning of the word epic as a “literary form that traditionally uses poetic and stately language to recount the adventurous deeds of a hero.”
Present The Ramayana as India’s most widely-loved epic (along with The Mahabharata). This story recounts the adventures of Prince Rama and his faithful wife Sita; it is popular throughout all of Asia. Ask students to “map” the events of the story with the “hero cycle.” Review the various concepts presented in Joseph Campbell’s monomyth cycle to become familiar with his ideas. (see attachment).
Distribute student copies of the “hero monomyth chart.” Working in pairs, students can analyze Gilgamesh, Odysseus, Jason, Heracles or Luke Skywalker. Review and discuss the possible interpretations. Students become very good at this and may differ in their analysis.
Read and discuss The Ramayana as a whole class activity. Aspects of traditional Indian culture can be interpreted. Glossary of terms will be helpful.  (See website for good supplemental activities). Complete “hero monomyth chart” as the story unfolds. Encourage students to work in groups to complete their charts.

Mithila Painting - click link below to images on ORIAS website
I. Art History - Students will learn about historical and cultural traditions of Mithila art.
A. Students will recognize characteristic colors and stylistic conventions
1. Brahmin caste
2. Kayastha caste
3. Dusadh caste.
B. Students recognize scenes of the Ramayana shown in paintings.
C. Students compare and contrast scenes as painted by three castes.

Have students locate Madhubhani on map of India. This ancient art form originated in the kingdom where Sita lived. Tell students that they will be asked to depict an important scene from The Ramayana as a culmination to the unit. Although some students feel intimidated by drawing, remind them that this is a simple style of “folk art” where realism is not crucial. This should be an activity where all students can be successful as they draw the simplified forms of characters.  Students can work together to list good topics for their paintings. Try to include events that review the entire epic. This is an opportunity to reinforce the monomyth cylce. Have students work with partners to develop their designs. Be sure to have examples of folk art for students to observe. Remind them that their paintings will be large (2’ X 2’). Remind the class that they must determine which type of Mithila painting to do:

After designs are conceived, provide individual sheets of brown butcher paper for students. Traditionally the women do their sketches using black ink, but students may prefer to use pencil first. Fill any empty space with flowers, animals or geometric designs. A border can be added to complete the picture.
After everything has been drawn with black pen, color is added. Traditionally, cotton on twigs was used to apply the paint. Q-tips can serve this purpose or you may prefer to use brushes. Do not mix colors. Use a separate Q-tip for each color to keep them as “pure” colors. Be certain that characters, designs and border fill the entire page.
Display work chronologically to retell the story of Rama and Sita!

SECONDARY LEVEL ART ACTIVITY:
III. Art Practice - Students will create works of art that show experiences common to all children using Mithila conventions.
A. Students discuss common childhood experiences of any culture.
B. Students brainstorm list of such experiences.
C. Students prioritize the topics to create a theme for a class exhibition.
D. Students review the characteristics of Mithila painting.
E. Each student paints a scene from his/her childhood in Mithila style